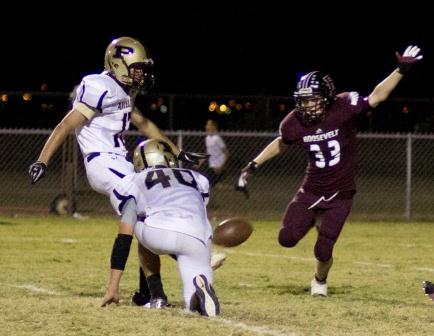 Freshman kicker Aaron Lopez played in his first varsity game and converted four of five extra points in the district win over Roosevelt. #40 Bryan Smith holds the ball for Lopez.
(Click the above photo to see additional photos)

ACUFF - The Bold Gold (1-0, 5-1) experienced a couple of firsts at Roosevelt's Eagle Field on Friday.

The District 2-2A, Division II opener for both teams was turned into the Antelopes first district win, 48-33, as they bounced back from their only loss of the season two weeks ago and a bye week that followed.

Antelope tailback D.J. Brown, had his second best rushing outing of the year carrying the ball 20 times for 241 yards and four touchdowns for an average of 12 yards a touch.  His performance improved his average per game yardage to 189 yards.

Another first for the Lopes was the debut of freshmen kicker Aaron Lopez who began his varsity career by kicking the ball out of the end zone for a touch back to start the game.  He also converted four of five extra point attempts.  Earlier in the season, Lopez kicked a 44 yard field goal for the Post junior varsity team.

The first possession of the game, by Roosevelt (0-1, 0-6), started at the Eagle 25 yard line and lasted almost seven minutes only to be stopped inside the nine yard line by a Bold Gold goal line stand.  The Lopes kept the ball the remainder of the opening quarter to punt it away giving the ball back to the Eagles to start the second period.

The second quarter saw the teams swapping touchdowns with Post winning the battle going into the locker room at half with a 21-14 advantage.  Brown, Bryan Smith and Pake Jones were responsible for the Lope scores while QB Derek Coppedge completed two passes for the Eagles' touchdowns.

In the fourth quarter at the 5:24 mark Post had an eight point lead, 35-27, after a Roosevelt score.  The Lopes decided to put the game out of reach by scoring on their next two possessions.  On the first play from scrimmage on the first of those possessions, D.J .Brown went up the gut for a 51 yard TD.  Minutes later, after outside linebacker Paden Babb made a tackle for a loss and getting the ball back for the Lopes, Brown duplicated his effort for another 51 yard TD to secure the win.  Brown now has 13 touchdowns on the season or just over two per game.

Both teams racked up the plenty of offensive yards:  Post 457, Abernathy 454.  Roosevelt mostly used the air attack while the Lopes stayed on the ground.

The Bold Gold rushed for 380 yards including Bryan Smith's 108 from the fullback position.  Quarterback Pake Jones passed for 77 yards on three completions, one a two yard TD catch by tight end Paden Babb.