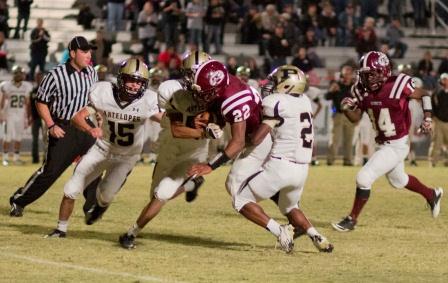 D.J. Brown (r), Dalton Holly and Campbell Kirkpatrick (l) make a tackle in the Tulia game last Friday. Brown excelled on both sides of the ball and was named the area's Male Athlete of the Week.

A-J's Honor Roll and Antelopes of the Week

The Bold Gold beat Tulia 45-41 in an exciting 2-2A, Division II district win to remain tied for first place with Abernathy with a 2-0 league record.  Click here for the game report.

Based on their performances in the Tulia game, the following Antelopes were named Players of the Game by the Post coaching staff:

Paden Babb - defensive - A big hit to start 3rd quarter sacked the QB causing a fumble which lead to a Post score.

Meanwhile six Post Antelopes are on this week's list of 2A players who had impressive stats in last week's win over Tulia.  Here's the Lopes as listed on the A-J's LoneStarVarsity.com: