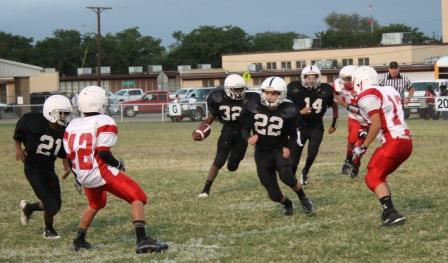 A.J. Reed (#32) ran for 205 yards behind great blocking and huge holes as seen here as the 8th grade team beat Brownfield.
(Click the above photo to see additional photos)

The Post High School football program had last week off, but the junior high teams were in action at Jimmie Redman Memorial Stadium on Thursday, October 4,  as they hosted Brownfield and came out with two wins in three games.

Eight grade student writer, Paxton Nava was at the games and filed these reports for The Garza Post.

The Post Bold Gold Antelopes faced the Brownfield Cubs.  Before the game A.J. Reed was determined to get over 200 yards for the game, and he did.  He ran for 205 yards on 12 carries getting in for two touchdowns and a 2-point conversion.

A.J. Escobedo was two-for two passing the ball for 32 yards and a 2-point conversion and one touchdown.  On the defensive side of the ball, Escobedo got five tackles and he forced a fumble to return it 40 yards.

The Post Middle School 7th grade team lost to Brownfield 32 to 36, our first loss of the season.  Mike Phergson ran for 141 yards on 17 carries and carried for three 2-point conversions.  He also ran back a kick-off for 72 yards.

Quarterback Aric Garza was picked off once but completed 1 of 3 passes and ran the ball three times for 10 yards and a touchdown.

On defense Garza forced a fumble, an interception, and made one tackle.  Mike Phergson made six tackles for the day and recovered a fumble.  The seventh grade team is now 3-1.

The Fun Bunch got their first win of the season against Brownfield winning 8-0.

Hunter Graves ran in for a 32 yard touchdown on a reverse play.  Jonathan Rodriguez carried the ball four times for 31 yards.  Daniel Gomez ran the ball 4 times as well and gained 18 yards.  Kobe Ammons carried the ball 3 times including the 2-point conversion making the score 8-0.

On defense Pete Lazcano was a run stopper making 4 tackles.  Kobe Ammons got 3 tackles in the win.