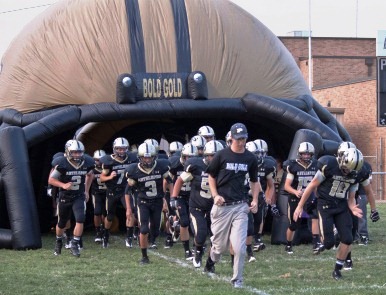 Adam Smith leads the Antelopes out of the tunnel and into the game against Lamesa at Jimmie Redman Memorial Stadium. He later delivered the student led prayer.
(Click the above photo to see additional photos)

REDMAN STADIUM - "The wind will benefit us" said Post Head Coach Steve Smith in a pregame interview on PostSportsRadio.com before the Antelopes took the field in a non-district contest against Lamesa on Friday.

The Golden Tornadoes, a big division 2A school, came into the game looking for their first win of the young 2012 season.  Post on the other hand was trying to build a win streak which they did by defeating the Tors 40-33.

Post (2-0) held a 20-12 lead into the fourth quarter which was productive offensively for both teams.  Post executed ball control with the run and Lamesa used the air game as each team scored three times for a combined 41 points making for a nail biter of a game.  Lamesa’s Kolt Moreland threw three touchdown passes in the quarter, but Post answered each score with one of its own on the ground to stay ahead.

The Bold Gold backfield rode the backs of their outsized offensive line to put together 315 yards on the ground which out produced the Lamesa air attack of 272 yards which was the difference in the game.  Post won the battle in the trenches with linemen "Travis Greathouse, Sergio Soliz, Nathaniel Gill, Jason Walden, Mondo Martinez and Paden Babb.   They are improving by leaps and bounds every week.  Our offensive game ball, goes to them and how well they are controlling games at the line of scrimmage," Coach Smith informed The Garza Post.

Although Lamesa scored first in the opening quarter, as did Moton in the first game, the Antelopes reached deep to get back into the game.  "We learned that the heart is the most powerful muscle in the body and so far this season, our opponents haven't matched our level of intensity and desire," explained Smith.

Bold Gold Player of the Game tailback D.J. Brown ran for his game leading 261 yards on 30 carries for an average of 8.7 yards while crossing the goal line four times for the Lopes.  Others carrying the rushing load were fullbacks Bryan Smith and quarterback Pake Jones whom each added a TD.  Jones was involved in two 2-point conversions; one on the ground and another on a pass to Campbell Kirkpatrick who after making the catch extended the ball to cross the goal line.  Caden Dean averaged five yards a touch running for 15 total from the full back position.

The more experienced and bigger Golden Tors were blown away by the stiff north wind except in the fourth when the wind was at their backs.  Moreland completed 10 of 21 attempts for 272 yards with three TDs in a comeback attempt.  The touchdown passes were for 16 and a 70 yards to Brody Alexander and the last score of the game was to Jahalani Edwards for 60 yards.

The Antelopes proceeded to control the ball and run out the clock for the win.

Lamesa used a platoon of backs to run up 156 yards on the ground.  In on nine tackles for Post was cornerback Alejo Rodriguez who was honored with the defensive player for the game.

The JV Antelopes defeated Lamesa 23-0.  Click here for the story.

The Bold Gold travel to Slaton for a battle of the unbeaten for a non-district game on Friday.  If you can't make the game, listen online at PostSportsRadio.com.  The pregame begins at 7:10 followed by the kickoff at 7:30 p.m.