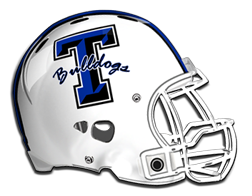 In Week 3 of the 2012 season the Post Bold Gold Antelopes (3-0) welcome neighbor Tahoka (1-2) of District 2-1A, Division I, Friday at Jimmie Redman Memorial Stadium for a non-district game.

The Bulldogs bring a one game win streak from last week's vic over Post's district foe Lubbock Roosevelt, 34-27.  The Bold Gold are coming off a win against Slaton in overtime, 22-15.

The junior high teams play Thursday for their first home game with the combined B-team scheduled for 4:30 p.m. against Childress and the 7th and 8th grades games to follow against Tahoka.  All games will be played at Redman Stadium.

Post's Coach Steve Smith expects Tahoka to be similar to Slaton in size and athleticism.

Meanwhile the Bulldogs will try to contain Post's offense which is averaging 391 yards a game while the defense is allowing only 277 yards.  The Lope's successful running attack is behind tailback D.J. Brown who is averaging over 193 yards on the ground.  Quarterback Pake Jones is averaging 72 yards in the air while receiver Dalton Holly is catching 2.3 passes for 51 yards a game.