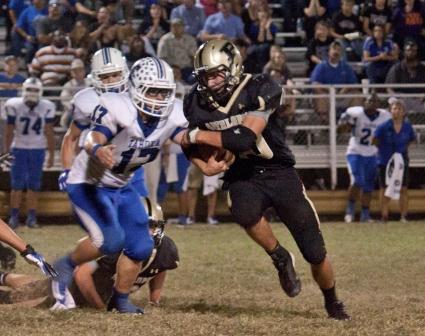 Fullback Bryan Smith protects the ball on his way to 83 yards rushing in the win against Tahoka, 22-13.
(Click the above photo to see additional photos)

REDMAN STADIUM - It took a balanced running attack of three for the Bold Gold to take down the spread formation passing game of the visiting Tahoka Bulldogs, 22-13, and to stay undefeated with a 4-0 record.

The Lopes' offensive base is the triple option meaning on every play there are three choices and that's just with the run game. "The fullback could get the ball inside, the quarterback could pull the ball and run around the end, or the pitch back could hit them with a pitch on the outside.  It makes the defense defend the entire field," Coach Steve Smith told The Garza Post.

Against Tahoka the ground game ran like a charm as the Bulldogs were concerned with containing tailback D.J. Brown, the area's 2A rushing leader, and that's what opened up the filed for both sophomore fullback Bryan Smith and quarterback Pake Jones to run at will.

Jones grows with confidence in the scheme each week.  Coach Smith said "I think he was very tuned in and did a good job" referring to decisions on which option was best at the time.  Jones ran up 76 yards for a 6.9 average.

Tahoka, now 1-3, realized early that it was going to take multiple bodies to stop fullback Smith.  His straight-ahead plowing running style was enough for 83 yards on 21 touches for an average of four yards a carry.

Brown, the game leading rusher for the fourth consecutive contest, was held to under 100 yards for the first time this season.  He ran the ball 17 times for a total of 92 yards and a touchdown.  He now is averaging 167 rushing yards a game.  He was also credited with defensive interception.

Although Post owned the ground game, one touchdown was through the air when Jones was on target to Troy Copeland for a six yard completion in the endzone at the 4:44 mark in the first quarter.  The Lope's first score of the game was Copeland's first TD of the season.

Four weeks in a row Post's opponents have lit up the score board first.  Coach Smith claims it's not in the game plan, instead he believes it "comes from the fact that we can not simulate the speed of our opponents in practice and other teams come out in their game plan that they have for us and it differs a little from what we have seen on film and we have to adjust.  It definitely is not a tactic."

The Bulldogs started out strong and quick scoring on the fourth play from scrimmage after receiving the opening kickoff.  Quarterback Trystan Hilger scored on an 18 yard bootleg with 10:20 on the first quarter clock.

Post scored next early in the third when Brown scampered 19 yards into the end zone.  Later in the period, when Post was stalled in the red zone, on fourth down Paul Martinez was called on to kick a 25 yard field goal and increased the Lopes' lead to 15-7 at the 8:37 mark.

Bryan Smith finished the evening’s scoring with a 10 yard run up the middle followed by a Martinez extra point increasing the lead to 22-7 with just 5:55 remaining in the game.

Tahoka came right back to close the gap on the next possession covering 80 yards on eight plays to make the score 22-13 with 2:23 on the clock.

Then Post was able to run out the clock for the win.

Post stays at the top of the standings when compared to district foes when northern Antelopes of Abernathy suffered their first loss of the season to Canadian, 36-29.

The Bold Gold take their 4-0 record into this Friday's homecoming game against Denver City now 2-2 after beating Coahoma 26-0.

PostSportRadio.com's Allen Grisham noted during Friday's broadcast that former Antelope receiver Kenny Garay is an assistant coach for Tahoka.  Garay played for the district champ Post team in 2004 and is a PHS 2006 graduate.  He later played college ball at Hardin Simmons University for a season with Allen's son Jerrad.  Garay completed his college education at Texas Tech.

I, Jim Plummer, had the opportunity to interview Lubbock Avalanche-Journal sports writer Tommy Magelssen during halftime on PostSportsRadio.com.  On demand playback of the game is available on the radio website.  To read Magelssen's story of the game, click here to go to LonsStarVarsity.com.