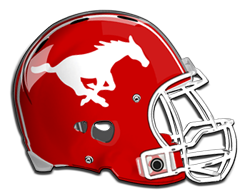 It's homecoming in Week 4 of the 2012 season as the undefeated Post Bold Gold Antelopes (4-0) play host to Denver City (2-2) of District 2-2A, Division I, Friday at Jimmie Redman Memorial Stadium for the final non-district contest.

Prior to the game, the Pride of Post Marching Band Boosters are holding a brisket supper Friday, September 28th in the cafeteria. The meal will consist of chopped brisket sandwich, chips, drink, and a dessert for $7.00 per plate. It will be served from 4:30pm - 7pm.  Dine in or carry out will be available.

The Mustangs bring a one game win streak from last week's shutout victory over Post's former district opponent Coahoma, 26-0.  The Bold Gold are coming off a win against Tahoka, 22-13.

The junior high teams play Thursday at home with the combined B-team scheduled for 4:30 p.m. and the 7th and 8th grades games to follow against Denver City.  All games will be played at Redman Stadium.

The last time Post and Denver City varsity teams played was in 2009 when Post won 17-0 in a district game.  The '09 Lopes finished second in district, finished the season with an 8-4 record and lost in the second round of the playoffs to Bushland.

The varsity game broadcast will be available at PostSportsRadio.com.  The pregame starts at 7:10 and kickoff is at 7:30 p.m.  The webcast can be listened to on computers, tablets and smart phones.  With the right device, the game can be heard at the game.