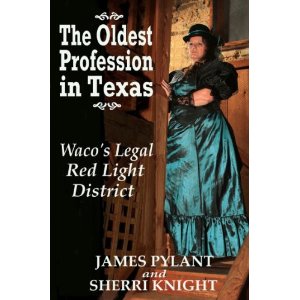 "The Oldest Profession in Texas," written by Sherri Knight and James Pylant, is a book covering a surprising part of Texas history:  legal prostitution in Waco, Texas.   Knight & Pylan will be at Ruby Lane Books, August 6, 1:00 to 3:00 p.m. to sign copies of the book and discuss the lengthy research behind this intriguing true story.

According to the authors' research, in the late 19th century and early 20th century, more than 1200 women lived as prostitues in Waco.  The city legalized prostitution within the city limits and saloons and bordellos flourished.  The book also tells the story of preacher J. T. Upchurch's crusade to reform prostitutes and abolish their profession.

Knight is a sixth-generation Texas and, after retiring from 31 years of teaching, she became a director of the Stephenville Museum.  She serves on the Erath County Historical Commission and is a member of the Daughters of the Republic of Texas.  The author has written two other books:  Tom P's Fiddle, A True Texas Tale and Vigilantes to Verdicts, Stories from a Texas District Court.

Co-author of this latest book, James Pylant, was previously editor of American Genealogy Magazine.  He currently serves as a director of the Stephenville Museum and also serves on the Erath County Historical Commission.  This is Pylant's third book.  His other publications are:  Blood Legacy, The True Story of the Snow Axe Murders and Sins of the Pioneers, Crimes & Scandals in a Small Texas Town.

For more information, or to reserve a copy of "The Oldest Profession in Texas" call 806-495-BOOK or email info@rubylanebooks.com.