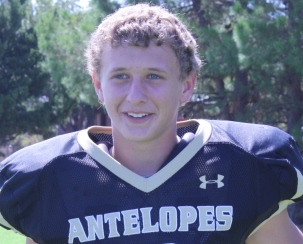 Quarterback Pake Jones was named "Antelope of the Game" against Lamesa.

Pake is the son of Greg and Channa Jones.  His favorite school subject is science and he prefers eating chicken.  The Texas Tech Red Raiders and the Philadelphia Eagles are his favorite teams, and he's a fan of players Trent Richardson and Michael Vick.  He likes to listen to rap, country and rock and Drake is his favorite musical artist.  He'd rather watch Teen Wolf on TV and the movie Friday Night Lights.  His favorite web site is facebook.  Pake is striving to graduate from high school and then college with an "A" average and he would like to play sports at the collegiate level.