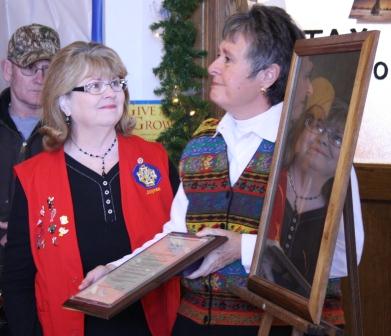 A crowd of approximately 25 gathered in the Garza County Courthouse with representatives from local VFW Post 6797 and the Ladies Auxiliary to commemorate the 70th anniversary of the December 7, 1941 attack on Pearl Harbor.

The group honored Post resident John David Miller who was a casualty of the attack and is believed to be entombed on the sunken hulk of the USS Arizona, which is now a National Shrine and Cemetery.  Mr. Miller's niece, Claudette Miller of Lubbock took part in the ceremony.

The attack on Pearl Harbor was a surprise military strike conducted by the Imperial Japanese Navy against the United States naval base at Pearl Harbor, Hawaii, on the morning of December 7, 1941. The attack was intended as a preventive action in order to keep the U.S. Pacific Fleet from interfering with military actions the Empire of Japan was planning in Southeast Asia against overseas territories of the United Kingdom, the Netherlands, and the United States.

The base was attacked by 353 Japanese fighters, bombers and torpedo planes in two waves, launched from six aircraft carriers.  All eight U.S. Navy battleships were damaged, with four being sunk. Of the eight damaged, six were raised, repaired and returned to service later in the war. The Japanese also sank or damaged three cruisers, three destroyers, an anti-aircraft training ship, and one minelayer. 188 U.S. aircraft were destroyed; 2,402 Americans were killed and 1,282 wounded.  (www.en.wikipedia.org)

Below is a Proclamation from the City of Post regarding this significant day in U.S. history.  County Judge Lee Norman also read a proclamation from Garza County paying tribute to the anniversary.

WHEREAS on December 7, 1941, the United States Naval Base at Pearl Harbor in the Hawaiian Islands was attacked, along with other U.S. military installations in the Pacific Theater, without warning or
provocation by the Naval Forces of the Empire of Japan; and

WHEREAS December 7, 2011 marks the 70th anniversary of the attack on Pearl Harbor; and

WHEREAS more than 2,400 Americans, both military personnel and civilians, were killed in these attacks.

WHEREAS more than 1,000 suffered injuries and the bulk of the United States' fleet stationed at Pearl Harbor was severely damaged or destroyed; and

WHEREAS VFW Post 6797 chartered on March 28th, 1946 was proudly named John Miller Post 6797 -Veterans of Foreign Wars of the United States; and

WHEREAS a total of 16,535,000 men and women served in the Armed Forces of the United States during the four long years of WWII; and

WHEREAS it is fitting and proper to remember the sacrifices of all who served in defense of our nation during World War II, especially those who paid the ultimate price of their lives in defense of the liberties that all Americans enjoy.

WHEREAS Post, Texas recognizes and appreciates the service of all military personnel, and where honor has been displayed in Post with the construction of a Veterans Memorial Plaza in June of 2007.

NOW THEREFORE, I,  Thressa Harp, as the mayor of the great City of Post, Texas do hereby proclaim December 7, 2011 as PEARL HARBOR REMEMBRANCE DAY.