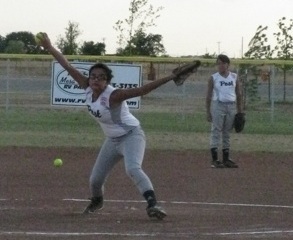 Katie Quintana pitched most of the innings for the Major League Lady Lopes at the Little League sectional softball tournament this past week in Lubbock.

Little League Section 1 tournaments for the Major League divisions were held this past week, and Post was well represented by its youth.  Both the girls softball and boys baseball all-star teams advanced out of District play into the sectional tournaments this year.

The 11-12 year old girls began the tournament on Friday July 8th.  They fell to Lubbock 17-0 that first evening.  The team rallied in game two on Sunday evening and defeated Borger 20-19.  This setup a rematch for the championship with Lubbock on Monday night, at the Lubbock Sports Complex.  The team lost the final game 27-2, but they came away with a 2nd place finish overall in the tournament.  Pitchers for the team were Katie Quintana, Lexi Antillon, and Victoria Gutierrez.  We're "very proud of these girls!", said Rebecca Quintana.

The 11-12 year old boys also suffered an opening round loss on Friday night, losing 12-0 against Midland West.  The team followed up by posting a 7-3 victory over Fabens Cotton Valley on Sunday afternoon in Maxey Park.  Post was eliminated from the tournament in game three, losing 14-4 to Childress.  Pitchers through the tournament were AJ Escodedo, Kace Lott, and Austin Britton.  "Everyone was proud of the effort put forth by these boys.", said Randy Britton.

The Garza Post appreciates the contributions from Angela Antillion, Randy Britton, and Rebecca Quintana which made this story possible.