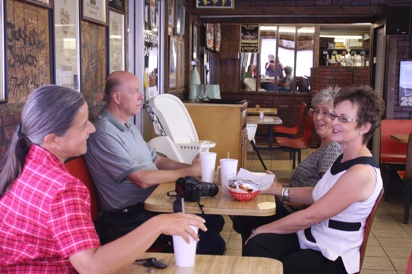 (from left) Janice Plummer, PACC manager; Karl Rivers, publisher of TravelHost; Janis Hubble, Lubbock Arts Alliance, and Thressa Harp, Mayor of Post were at Holly's Drive In to enjoy some burgers and be part of the taping for an upcoming Texas Country Reporter segment.

Our community has received a great deal of media attention during the past few weeks with a California film crew on location here to film a movie; the popular television show, Texas Country Reporter, featuring a local business and Texas Highways magazine featuring Post in its August issue.

Trent McDonald is front and center in a large photo that accompanies the feature article in Texas Highways, titled "Primer on Post."  In anticipation of the article, the magazine sent a photographer to Post last year to capture the spirit of the Post Stampede Rodeo as well as photograph other sites in the community.  "I'm sure the photographer took hundreds of photos.  This great picture of a Post cowboy was perfect for the story,"  said Rosa Latimer, who wrote the article for the magazine.  Latimer, who has 25 years experience as a free lance writer and photographer is also managing editor of The Garza Post.

McDonald, a 2005 Graduate of Post High School, is well known on the rodeo circuit.  He participated in College Rodeo for Clarendon College and Tarleton State University.  He is a member of PRCA, TCRA, & WTRA and in 2010 entered PRCA rodeos from Florida to Oregon, including Cody and Cheyenne, Wyoming.  Trent won the Marshall, Texas PRCA rodeo, was WTRA Mens all Around Champion in 2009 and qualified for TCRA finals in 2010.  He is currenty the damage control technician for the Garza Wildlife Damage Association, in association with the Texas A&M System.

The Texas Highways article also featured local theaters, museums, overnight accommodations and eating establishments.  "Writing for a magazine such as Texas Highways is a bit of a challenge.  The editor chose what to feature in the story and there was very little wiggle room,"  said Latimer.  "Our community offers so many options to visitors, it was difficult to stay within the magazine's 1000 word limit."

As we reported earlier, the television show, Texas Country Reporter, filmed a segment at Holly's Drive In recently.  The local restaurant is included in a book about "the best burgers in Texas" written by Rick Vanderpool.  When it airs the show will highlight several burger joints covered in Vanderpool's book.  Monday Holly's burgers were the star, but several locals were on hand to eat "on que" for the camera.  At this time the air date for this segment has not been scheduled.

Although the final product may not be seen for quite some time, scenes for a "modern day Western," The Arroyo, were filmed in Post and Garza County during the past two weeks. Several Post residents were involved in this project either in a production responsibility, scheduling or appearing on camera as extras.

It is gratifying to share information about our community with others and this type of media attention brings visitors to town who buy food and gas; stay in our hotels and shop with our merchants.  The Post Area Chamber of Commerce reports receiving calls very soon after the Texas Highways magazine hit the newsstand.  The callers were interested in visiting Post.  Every opportunity we have for exposure statewide and nationally introduces our town to people who may visit, may consider moving here or starting a business here.  Any of these would have a positive impact on our community.