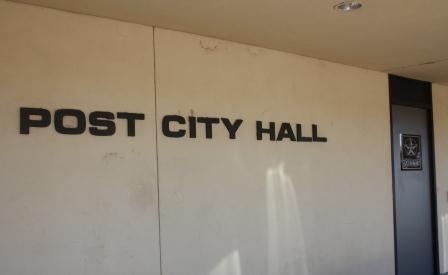 Garza Theater is up for sale

In a move to conserve water usage and to return the medians to their former beauty, the Post City Council at a regular meeting on August 14, pursued the goal of completing the Main Street project which started about a year ago.

The city will advertise for bids to finish the five downtown medians by covering them with artificial turf rather than trying to grow natural grass during a severe drought situation.  Although, in an attempt to save the trees, a special irrigation system may be installed.

According to City Manager Arbie Taylor the funds left over from the recently completed Main Street brick repair project may cover the guesstimated cost of up up to $175,000.

An electrical upgrade to the downtown area was also completed recently.  That project replaced the historical look street lamps and added many outlets to support the lighting for the Christmas Holiday season and other year round events.

The council voted to table (postpone action) on whether to enter the stringent Stage 3 water restrictions.   Taylor explained that the city's attorney, Slater Ezra, recommended that the city wait to take action until there is a contract to purchase water from the White River Municipal Water District.

Post has been on a month-to-month agreement since the previous WRMWD contract expired about two years ago.  Both district and city officials believe that a final deal is very close.  The city may call a special meeting for August 28 to consider the contract.

In other action, the council approved the Community Recovery Center's request to continue partial funding for 2012-2013 fiscal year.  The Post-Garza County EMS got a preliminary approval to expand it's operation to include paying daytime hourly Emergency Medical Technicians.

Bids are now being accept for the purchase of the Garza Theater.  The city's property was condemned last September because of structural concerns.  The issues have been corrected and the historic facility is safe for the public to enter again.

The George R. Brown partnership was granted a variance to drill an oil well inside the city limits at 13th and Osage.

The council voted to continue with the Texas Municipal league to provide city personnel benefits.