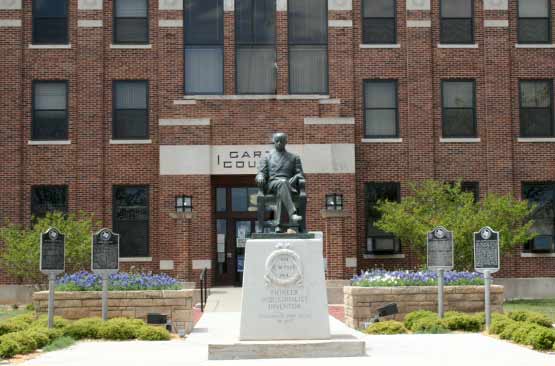 The Commissioners' Court met in a regular meeting on Monday July 23, 2012 with Judge Lee Norman and Commissioners Morris, Brannon, and Benham in attendance.  County officials and a variety of citizens were also in attendance, including Terry Morgan, Republican Party nominee for sheriff.

Near the end of the meeting, the Commissioners' Court started discussions of the 2012-2013 budget, for which work is already underway.  The Treasurer's Office has received budget requests from the different offices as reported by Treasurer Ruth Ann Young.  Most departments have requested personnel salary increases of about 6% and a notable increase may be the addition of full time staff for the ambulance service.

The commissioners considered the proposed 2012-13 budget from the Garza Appraisal District.  The budget would add approximately $18,000 to the recently amended and approved budget.  The Garza County portion of said budget is 27.5%.  A motion was made to oppose the presented budget and the motion passed.

The meeting began with standard business including the presentation and approval of the June 25 meeting minutes, reports for County offices, and reports for precinct and countywide accounts.

Later the Commissioners considered the 2012-2013 health insurance policies, handled by Blue Cross/Blue Shield.  The renewals included a 2.1% increase in cost and were approved as presented by the Texas Association of Counties.

Prior to recess, the Court voted in majority to maintain Texas Department of Motor Vehicles optional fees at the current rate of $10, with 97% kept by the county.

After recess, the Commissioners discussed payment of past due medical bills for Garza County inmates with the Lynn Conty Hospital.  After input from Judge Norman and Attorney Munk (by letter) the motion was made and approved to pay the bills totaling $4000.

The Court members heard from County Clerk Jim Plummer with regard to Department of Public Safety mandates regarding the percentage of disposed cases in Texas counties.  They indicate a required completeness percentage of 90% for counties to qualify for grant funding.  The Court chose to table the issue after hearing the proposed improvement plan from May 2010.

In more regular business, five line item transfers and budget amendment requests were heard and approved. This was followed by a brief report on the meeting Judge Norman and Commissioner Benham held with architects Parkhill, Smith, and Cooper for the courthouse heating and cooling project.  Plans are finalized and will be presented to the court at a later date.

For the public comment section of the meeting, Chris Atkinson introduced Terry Brown who will be returning to Post and serving as a counselor at the Community Recovery Center.