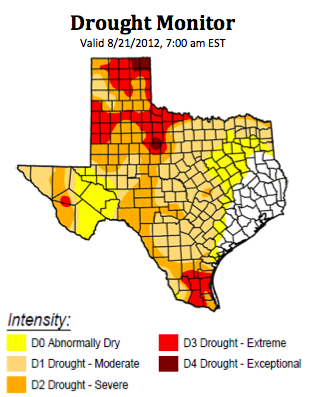 Summary
Scattered showers were received around the state last week. Areas of North Texas and the Low Plains saw the greatest amount of rainfall, with some areas recording as much as four inches for the week. Portions of South and Central Texas received little or no precipitation.

Row Crops
In the High Plains, dry land cotton condition was aided by rainfall and cooler temperatures with setting of bolls nearly complete. Cotton harvest was active from East Texas to the Lower Valley. Corn and sorghum also benefited from improved growing conditions in most areas. Harvest continued around North and Central Texas and was complete in South Texas and the Lower Valley. Harvest of corn for silage was active in the High Plains. In East Texas, some corn producers contended with armyworm and grasshopper pressure. Peanuts made good progress in the Low Plains without much disease pressure reported. Rainfall allowed some producers to turn off irrigation on peanut fields.

Livestock, Range, and Pasture
Showers helped to green pastures and rangeland in some parts of the state, allowing hay cutting and baling activities to resume. However other areas remained dry with more rainfall needed. In parts of South Texas, sustained hot, dry weather led to declining pasture conditions and lower stock tank levels. Livestock across the state were generally reported to be in fair to good condition. Weaning and selling of calves was active in East Texas.