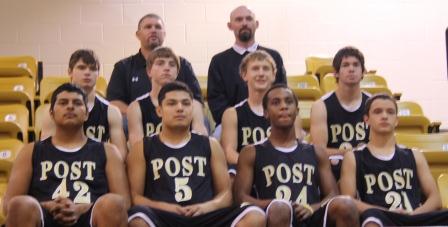 The 2012 varsity Antelopes finish the season on Tuesday.

Lopes Fight Back at C-City

COLORADO CITY - The Bold Gold stood up the the District 3-2A basketball champions for the second time this season.

The final road test found the Antelopes just five points short of an upset, losing to Colorado City 55-51.  Similar to the first meeting against the Wolves in Post, C-City played a ball control game.  In the first meeting, the Lopes lost by just three, 37-34.

Last Friday, Post Coach Jimmy Toney's team was far behind most of the game.  Going into the final period, Post trailed 42-29.  The Lopes put things together and scored 22 points in a comeback attempt outscoring the Wolves 22-13.  Corbin McDonald and Dalton Holly contributed 8 points apiece in the fourth.  C-City received 11 of it's 13 points at the free throw line having 19 attempts.

On the game, McDonald scored 16 and Holly had 14.  Senior point guard Derek Gainey hit four 3-pointers on is way to a game high 18 points for the Wolves.

With the win, Colorado City clinched first place in District 3-2A for the second consecutive year.

The Antelopes play their last game of the 2012 season as they welcome Coahoma at the Arena.  The JV start at 4:30 p.m. and the varsity will follow.

Later, the Arena will play host a 1A, Division II girls bi-district game between New Home and Grady.  The game is scheduled for 7:30 p.m.