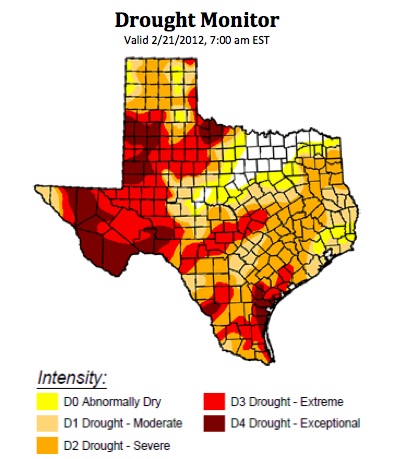 Texas received rainfall in most areas of the state last week with rainfall totals mostly ranging from 0.01 to 3 inches. The Panhandle and West Texas received little or no precipitation while strong winds further reduced soil moisture.

Small Grains: Winter wheat suffered from dry conditions in the High Plains. In North and Central Texas, small grains benefited from precipitation and warm temperatures, with some producers reporting that wheat and oats were maturing ahead of schedule.

Row Crops: Farmers around South Texas began planting corn and sorghum. However in many areas, wet field conditions delayed land preparation and planting. Cotton producers continued to list fields and book cotton seed for the upcoming season. Lack of moisture remained a serious concern for both corn and cotton producers in the High Plains and the Trans-Pecos.

Livestock, Range and Pasture: In the High Plains, the Trans-Pecos and parts of South Texas, range and pastureland remained in need of additional moisture. Livestock producers continued to supplement with hay and protein. In most other areas, cool and warm season grasses benefited from rainfall and warm temperatures, allowing producers to scale back supplemental feeding. Across the state, weed growth was a concern. The calving season continued and lambing and kidding was underway. South Texas stock tanks remained low, while tanks from the Edwards Plateau to East Texas were filling due to recent rainfall.