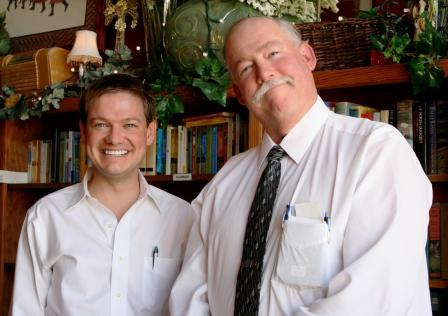 While the redistricting situation in Texas changes almost daily, there has been one constant:  the determination of candidate Trent McKnight to represent District 68 in Austin.  It appears at this time that District 68 will include Garza County as well as Childress, Collingsworth, Cooke, Cottle, Crosby, Dickens, Fisher, Floyd, Hall, Hardeman, Haskell, Jack, Kent, King, Montague, Motley, Stonewall, Throckmorton, Wheeler, Wilbarger, and Young counties.

McKnight was back in Post this week sharing his message of “water, jobs and schools for rural Texas.”  During an interview for garzapost.com, I asked McKnight why he had chosen to run for State Representative.  He answered, “I have two passions:  agricultural and rural communities.  This district is one of two districts in Texas that is truly rural.”

McKnight doesn’t feel as though he lost ground during the challenges to redistricting maps in Texas.  Those challenges have gone all the way to the U. S. Supreme Court and the issue remains unsettled.  Referring to the challenges to redistricting maps, McKnight explained, “Things began to get crazy around the first of November.  I never intended to campaign during the holidays so I’ve been able to watch how things progressed.”  The candidate feels that any additional changes will most likely not affect District 68.

The former FFA National President also understands the importance of the oil and energy business as it relates to jobs for the area.  “It is important for the energy sector to receive support from Austin” and should be protected from “overly burdensome regulations.”  He believes the same is true for agricultural business.

McKnight also believes he has a personal understanding of the economic challenges of rural communities.  “I founded an organization and raised over five million dollars in my hometown [Throckmorton] for beautification and economic development purposes,” he explained.  “I want other communities to have access to these types of programs, but we need to be sure they are managed efficiently and be sure the money is used at a local level, not to support bureaucracy in Austin.”

The 32-year-old Republican grew up in Throckmorton and continues to live there where he co-manages McKnight Ranches, full-time cow-calf operation.  McKnight earned his Bachelors of Science degree in Agricultural Economics from OSU and his Masters of Science degree in Comparative Politics from the London School of Economics.  He was Agricultural Advisor to the U. S. Military in Iraq and Agricultural Advisor to the United Nations in Africa.  In addition, McKnight was Chairman of the United States Department of Agriculture’s Advisory Committee on Beginning Farmers.

Regarding the status on the Texas redistricting map, according to www.txredistricting.org, “The San Antonio court has moved the hearing on interim maps and the election schedule up by one day to February 14. The court said in its order that the hearing would continue February 15 if needed.  Briefs on interim maps and proposed findings of fact and conclusions of law are due Friday, with reply briefs due Monday by noon."

The final status of the state's redistricting map remains unclear; however, there is no question that Trent McKnight is in the race for State Representative of District 68.  And, no question he is working to get his message to the people in the 22 rural counties that now make up that district.