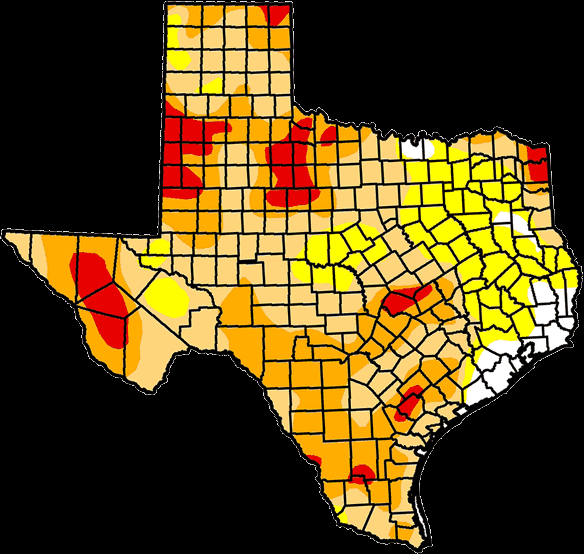 Most areas of Texas received rainfall last week. Parts of South Central and Coastal Texas recorded 10 inches or more for the week, while other areas observed only scattered showers.

Small Grains: Small grain harvest neared completion in the Plains and the Trans-Pecos. In the Edwards Plateau, some producers continued to bale wheat hay.

Row Crops: Sorghum and corn harvest continued in the Lower Valley, but was delayed in the Blacklands and South Central region due to heavy rainfall and wet fields. Hot weather and dry conditions brought stress on many row crops in parts of Central Texas. Cotton condition varied across the state. Cotton defoliation had begun in early maturing fields in the Lower Valley, while in the High Plains, cotton squaring continued. Producers sprayed for weeds, while insect damage was moderate. Peanuts made good progress in South Texas.

Fruit, Vegetable, and Specialty Crops: Producers continued to harvest fruits and vegetables in East Texas with some reports of disease pressure on vegetable crops. Vegetable harvest was nearing completion in areas of South Texas. Pecans continued to progress around the state with wet weather causing some problems with disease. In the Edwards Plateau, peach production was beginning to taper off.

Livestock, Range, and Pasture: Range and pasture condition improved substantially in areas that received adequate rainfall. Many producers were able to make a second or third cutting of hay, though rain hampered cutting and baling activities in some areas. Drier parts of South Texas and the Panhandle experienced declining pasture condition. Weed growth and grasshopper pressure continued to affect hayfields and meadows in many parts of the state. Livestock condition was generally fair to good. Some supplemental feeding continued in South Texas. Stock tanks, ponds and creeks were replenished by rainfall in many areas.