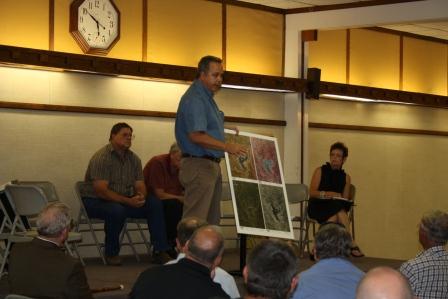 Tom Fulton (standing), Manager of the White River Municipal Water District, informed the crowd of about 75 concerned citizens of the status of the water supply and it's future at a joint meeting of the City of Post and Garza County. The gathering was held on July 24 at the Post Community Center.

Questions answered and others raised at Public Hearing

The City of Post and Garza County conducted a joint town hall meeting on Tuesday evening, July 24 at the Post Community Center.  The topic of the gathering was water:  the lack of it and how to secure more of it.

Both entities are connected to the White River Municipal Water District (WRMWD) which is the water supplier for the City and some county residences.   Both entities had the opportunity to vote for the submission of two separate applications to the Texas Department of Rural Affairs for the Texas Community Development Block Grant program (TxCDBG) disaster relief fund grant.  Therefore requesting $350,000 per entity for water development.  The Garza County Commissioners' Court chose to take action and voted to pursue the grant funds.  (Click here for details.)  Meanwhile the Post City Council did not take action but will consider the item on Monday, July 30.

In addition to the members of the city council and the commissioners' court, representatives from the WRMWD, the South Plains Association of Governments (SPAG) and the Texas Commission of Environmental Quality (TCEQ) were present to offer information and answer questions about the grant opportunities and the Stage 3 Drought Contingency Plan.

In outline form, here are most of the items addressed and clarified at the meeting:

-In January 2012 the Texas Department of Agriculture extended disaster relief programs to include severe drought which this region has suffered.

-The WRMWD includes the cities of Post, Spur, Crosbyton and Ralls.  The counties of Garza, Crosby and Dickens are considered as possible grant recipients.

-The entities must meet three eligibility requirements:  (1) An engineering study showing that the entity is with-in 180 days of the water source no longer being viable; (2) The 2010 census data proves that the entity is at the low to moderate income level; and (3) enter the TCEQ Stage 3 water restriction plan.

- The City of Post and Garza County will be under a WRMWD mandated Stage 3 Drought Contingency Plan effective August 1, 2012 – October 31, 2012.  Click here for details.

-Under the Stage 3 Plan, variances may be granted from either the member city official or the district’s general manager, depending on the jurisdiction.

-Each entity could apply for a $350,000 grant with no matching funds necessary.

-SPAG could submit the grant applications in August.

-In an attempt to bypass the grant process, an entity could contribute its share ($350,000) to the emergency back-up water project and not have to enter Stage 3 of the Drought Contingency Plan.

-The Texas Water Development Board considers the lake empty when it is at 32 feet.

-TCEQ has determined that if White River lake does not receive rain between now and February 2013 the level could be at 32 feet.

-If each of the seven entities were to receive $350,000 (totaling $2,450,000), the funds would be used to develop new back-up emergency wells and to rehab existing well fields.

-If funds are secured soon, wells could be drilled as early as February 2013 and could take up to two years.

-The Post Lake Reservoir, which has been a possibility for many years, may cost close to $65 million.  If construction started now, it would be 2029 before water could be drawn from it.

-The City of Post and WRMWD do not currently have a contract and are operating on a month-to-month agreement from a clause in the previous contract.  One of the reasons why there is not a new contract is that WRMWD is not agreeable with the city pursuing or obtaining back-up water sources.