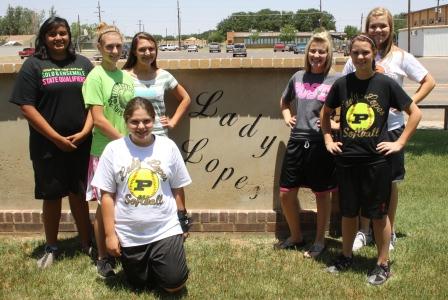 Callie Odom - Newcomer of the Year

The Post Lady Lopes are well represented on the 3-2A All-district Softball Teams.

Senior ace pitcher Kari Dunn wraps up a stellar high school career on and off the field and accompanies two other teammates on the first team, three on the second team and an honorable mention member on this year's all-district squads.  The Class of 2012 Valedictorian, Dunn, is joined on the all-district first team with junior Kayla Comeaux and freshman Kelbie Oden.  Dunn has been an all-district selection in all four years playing varsity softball.

Freshman Callie Odom was named the Newcomer of the Year for her high efficiency at the plate as she led the Post team with a .623 batting average with 38 hits in 22 games for the season.  Her slugging percentage of .918 was the team's highest and she recorded 29 runs batted-in, nine stolen bases and her team's best on base percentage, 66%.

"As a whole, I was very impressed with the way this team competed throughout the year, said first year head coach Toby Allen.   "I'm excited about the future for these athletes. We had three freshmen, and three sophomores get honors from our district and those kids will be helping us for the next few years."

On the mound, Dunn was 9-7 for the season striking out 49 batters.  On offense she had a .409 batting average, two home runs and 14 stolen bases.  Comeaux competently handled third base for the ladies and batted .431 with 28 hits and ten stolen bases.  Kelbie Oden celebrated her rookie year with 18 steals and a .492 batting average.

Second team selection Curtis was Post's stolen base leader with 19 while she batted .468.  Ramirez was also reliable at the plate with the second best slugging percentage of .600 and a batting average of .378.  Greer batted .373 with 25 hits on the season.

Coach Allen added "A big thank you to the softball parents. Those guys supported us so much, and made this year great for the kids and me as well."