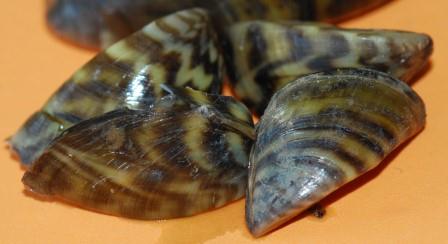 LAKE TEXOMA - There are some new regulations affecting boat owners in Texas. Folks moving boats with water still in bilges or live wells from certain north Texas lakes could be subject to fines. The new law is part of a continuing effort to protect state waters from invasive species, the latest culprit being zebra mussels.

In Lake Texoma, there lurks a tiny striped invader that is causing problems for motor boats and water supply systems.

Todd Robinson, Texas Parks & Wildlife Technician, explained “they have the ability to attach to hard substrates that are upright in water, meaning they could attach to your boat, they could attach into pipes, onto pumps, any means of water conveyance. They are a general nuisance.”

They’re called zebra mussels and Texas Parks and Wildlife is trying to stop the spread of this invasive species with a new law aimed at getting boaters to drain all water from their boats before leaving an infested lake.

“If they (boat owners) spot adult attached zebra mussels on their boat when they pull it up onto the ramp, they are required to remove all of those organisms before they trailer it away down the highway. We urge them to go ahead and have the maintenance staff at the marina that they're at go ahead and pressure wash the boat to remove them off right there at the lake,” said Robinson.

Zebra mussels originated from Eurasia and are believed to have been transported in ballast water from ships into the Great Lakes. They’re spreading across the country and now they’ve made their way into Lake Texoma and Sister Grove Creek. The new law applies to boaters leaving the Red River basin in Wichita County downstream to the Arkansas border. With the summer boating season under way, Texas Parks and Wildlife is ramping up awareness around Lake Texoma.

Robinson added “they (zebra mussels) are here and they're not going anywhere. There's no way to totally eradicate them. At this point we're just wanting to keep them in Lake Texoma and prevent their spread throughout the rest of Texas.”

Read more about Zebra Mussels on Texas Parks and Wildlife.