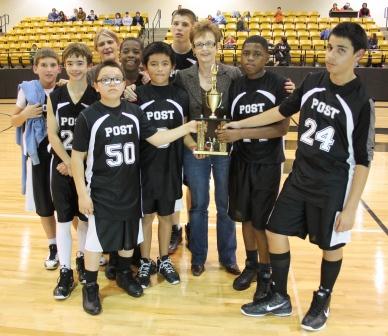 Take twenty-one teams totaling about 150 fifth and sixth grade boys and girls and let them play 40 games over a twenty-two hour period and you'll get a lot of wholesome fun and excitement.

The 1st Annual Post City Invitational basketball tournament ended at 1:00 a.m. Saturday night/Sunday morning with the Tahoka girls winning the championship over Petersburg.  Just before that game the Lorenzo Celtics defeated the Post Black team, 24-17, to claim the boy’s title.

The Post team, coached by Becky Justice, started playing Saturday at 12-noon and finished their championship game at about 11:00 p.m. playing a total of five games, three of those against Lorenzo because of a two-loss (double elimination) rule.

The Post girls’ team coached by Ron and Crystal Holson were just one win from a chance to play for the championship.  They played at total of four games including one Friday evening.  Their final game was close as they staged a comeback attempt but lost 15-11 to Colorado City.  The team roster includes Alexus Rodriguez, Miranda Perez, Liz Soria, Sanya Soto, Addison Rodriguez, Leslie Gill, Caycee Holson and Shailey Miller.

The basketball fest was put together by the Post Youth Athletic Group (PYAG) and according to tournament co-organizers Justice and Carey Bridgeman, the event was a tremendous success.

Mayor Thressa Harp was on hand to present the championship and runner-up trophies.  Not only did she have a "great time" her and friend Delores Redman were amazed that the young athletes played with such confidence.  Harp commented on the economic impact of the event saying "not only did we raise money for our youth sports program but each family was here long enough to eat out, purchase gas and possibly shop our stores."

There's still more youth basketball on the horizon as Post will be the place for the Brynne's Smiles Tournament scheduled for April 13-14.  Justice is expecting teams from as far as Ft. Stockton and Wall to take part.