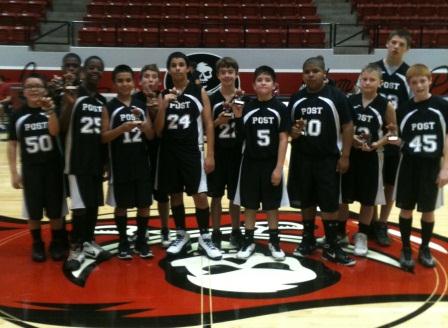 The boys began their run in the tournament defeating O'Donnel 32-26 on Friday night. They returned Saturday for a match with the Shallowater All-Stars, defeating the Mustangs 35-27. Later that evening the boys encountered their first loss to the Lubbock Cooper Red team.

Sunday morning brought the anticipated match up between Morton and Post. The Bold Gold team pulled out another victory with a score of 32-28 in which they advanced to the tournament championship to again play the Cooper Red.  Although they didn't beat Cooper, they were honored in a post game ceremony with the first runner-up trophies for their outstanding performance amongst All-Star teams from across the area. The team would like to extend their thanks to Mr. Anthony Cruse for his assistance this past weekend.

PYAG teams will be competing in the West Texas Hoops Challenge this weekend in Colorado City. Team members Kevin Cruse, Mack Phergson, Isaac Soto and others are expected to appear in this event. The girls team led by Coach Ron Holson is expected to debut at the event as well.