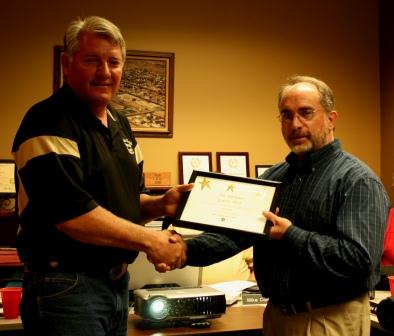 Jim Plummer, co-founder and sports reporter for garzapost.com was named to the 2012 Media Honor Roll by the Post Independent School District.  The award was presented to Plummer during the Post ISD School Board meeting, May 15.

Sponsored by the Texas Association of School Boards (TASB), the Media Honor Roll program recognizes reporters statewide for fair and balanced reporting of new about public schools.  Media representatives from more than 470 Texas newspapers, radio and television stations, and online publication were honored this year by their local school districts.

Plummer has been covering sporting events in Post for over three years, recently for Garzapost.com and PostSportsPage; and formerly for the Post Dispatch.  He has also produced radio web casts for Post Sports Radio covering Antelope Football and Post varsity girls and boys basketball games.  Plummer has also been the public address announcer for the home varsity basketball games for five seasons.

"It is an honor to be recognized by TASB and the Post school board for something I love doing.  I've had plenty of help covering sports and other school activities from members of the PISD staff, the superintendent, the athletic director and the very cooperative and responsive coaching staff,"  Plummer said.  "I thank God for the ability to do this work.  I appreciate the student athletes for what they do and my wife, Janice, for tolerating my love of sports."

Criteria for a recepient of this honor includes the media representative's efforts to get to know the superintendent, board president and the district's mission and goals; report school news in a fair, accurate and balanced manner; give a high profile to positive news about schools; personally visit the schools; and maintain a policy of "no surprises" by sharing information with school officials.

"Districts across Texas appreciate these reporters for their balanced and accurate approach to sharing both the challenges facing our schools and the successes achieved by local students, teachers and school boards," said Gary Inmon, TASB president.  "Their work aids local communities in focusing on the goal of providing the best public schools we can for every child."

The Texas Association of School Boards was established over sixty years ago to serve local Texas school districts.  According to the organization, school board members are the largest group of publicly elected officials in the state.  The districts they represent serve more than 4.9 million public school students.