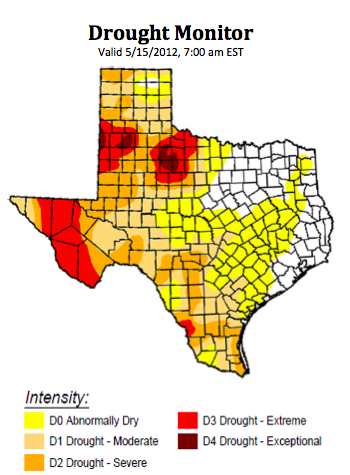 Rainfall Across Much of the State

Precipitation: Much of the state received rainfall last week. Portions of Central and South Texas received five inches or more while most other areas observed scattered showers. Parts of the Low Plains and North Texas received little or no rainfall.

Small Grains: Winter wheat harvest and hay baling continued around the state with yield reports varying widely. In the High Plains, some small grain producers were able to halt irrigation because of rainfall. Problems with rust were reported in some areas. Surplus rain delayed harvest in parts of Central Texas.

Fruit, Vegetable, and Specialty Crops: Fruits and vegetables made progress in North Texas. Peaches continued to progress with some ripening ahead of normal. Pecan producers in South Texas reported little or no insect pressure, but continued to monitor daily. In the Lower Valley, harvest of tomato, squash and cantaloupe continued while citrus harvest wound down. In the Trans-Pecos, fall-planted onions were bulbing.

Livestock, Range, and Pasture: Range and pastureland improved in most areas due to rainfall. Producers continued to apply fertilizer to hay pastures and spray for weeds. Supplemental feeding of livestock continued in a few areas, however greening pastures provided much-needed grazing for many producers. Cattle body condition was improving in most areas. Flies continued to be a problem for many ranchers. Breeding season for spring calving began in some areas.

Drought monitoring maps can be found at https://droughtmonitor.unl.edu/