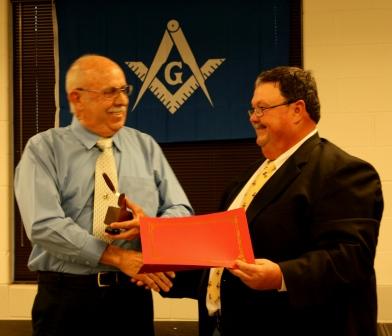 Paul Beebe (left) was given the prestigious Golden Trowel Award from Post Lodge 1058. Daniel Yarbro (right) made the presentation.
(Click the above photo to see additional photos)

A Centennial Celebration of the Post Masonic Lodge #1058 was held April 27 in the Post ISD Cafeteria.  After a meal, Daniel Yarbro, Worshipful Master of the local Lodge, welcomed the large crowd and the colors were presented by Boy Scout Troop 316.

Following the presentation of service awards for 25, 40 and 65 years, special awards were given.  Clifford Colvin received a Proficient Certificate in Esoteric Work (5 years).

Dalton Thuett, Senior at Borden County, was the recipient of the Lamar Medal.  The award, named for the second President of the Republic of Texas and Freemason, is given by local Masonic Lodges to students or educators for recognition of outstanding personal achievement in academics, citizenship, community service or sports in spite of difficulties.

The Community Builder Award was presented to Post Mayor Thressa Harp.  This award is designed to enable a Lodge to recognize outstanding non-Masons who have distinguished themselves through their service to the community, to the local, state or national government, to their church or synagogue, or to humanity and who follow the same standards that have been established for Masonic behavior.

Paul Beebe, long-time member and Past Master of Lodge 1058, received the Golden Trowel Award.  This award is the Lodge's formal recognition of a Brother for his devoted service to Masonic principles.  The Golden Trowel is considered the highest award a Lodge can bestow upon an individual members.  Others who have received this award from Post Lodge 1058 are:  Billy R. Case, Michael Colvin, Archie Gill, Joe L. Harris, Walter Jones, Jr., Walton R. McQuien, Harvey Moore and Benjie Smith.

The Post Lodge 1058 began in 1911, when Will Cravy, P. S. Nichols and other Masonic members traveled from their homes in the Verbena community to Dickens, 40 miles by buggy, to attend lodge. According to Lodge history, two days were required to make the round trip.

Originally meetings were held in the American Legion Hall just south of what is now the Community Center.  After a fire destroyed that building in 1916, the Lodge met upstairs in the building now occupied by the Main Street Mercantile, in space rented from the Double U Company.  In 1928, a building was built on North Avenue I, just north of the First National Bank building where the Lodge continues to meet.

Over the course of its 100 years, the Lodge has had 4 District Deputy Grand Masters, one Secretary who served 30 years, several Certificate of Proficiency holders and several members who have served more than one term as Worshipful Master.