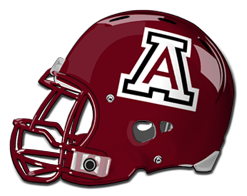 Clash of the Antelopes

Both teams take a 4-0 league record into the final game of the regular season set for a 7:30 p.m. kickoff at Jimmie Redman Memorial Stadium.  Abernathy looks to win a second consecutive district title and only Post stands in their way.

Last week the Bold Gold manhandled Olton 40-0 and Abernathy beat Roosevelt 34-7 to set up Friday's clash for the district title.

Noted in the Lubbock A-J's LoneStarVarsity.com honor roll, four Post Antelopes were featured for their play in the Olton shut-out:

Win or lose, both Antelope teams are guaranteed post season play.  The winner of this Friday's game will get a bye next week while the loser will likely play Spearman in a bi-district playoff.

Both teams are dead even in point production per game, 34.  Abernathy's defense is stingier than Post's by allowing only 7 points while Post permits opponents 22 points a game.

Thursday evening the JV Lopes travel to Abernathy for a 6:00 p.m. game.  The junior high teams are at home with the "Fun Bunch" B-team playing Plains at 4:30 p.m. followed by the 7th and 8th grade teams against Abernathy.

The weather forecast for the game Friday in Post is warm and breezy with a kick off temp of about 70 degrees and will drop to 65 by the end of the game.

If you can't come to the Post vs. Abernathy game, you can listen to it live on PostSportsRadio.com.  The pregame starts at 7:10 p.m.

Here's how District 2-2A, Division II has shaped up after the fourth week of district play: