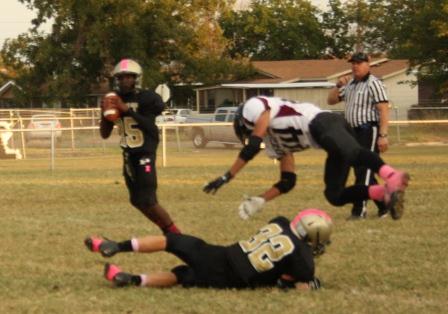 Running back Blaine Reece (32) upends the pass rusher to protect quarterback Cambry Gilbert in a 41-13 win over Roosevelt.
(Click the above photo to see additional photos)

The Lopes had three players with at least 100 yards rushing.  Cambry Gilbert, Blaine Reece and Christian Saucedo all had over 100 yards on the night.  The Lopes scored touchdowns in every quarter and exploded for three in the final quarter.

Gilbert's first touchdown came after the defense forced the Eagles to punt on their opening possession of the game.  Backs Gilbert, Reece, Saucedo, and Shandon Wiley all had long runs on the drive.  Gilbert scored from 8 yards out and the extra point kicked failed and the Lopes led 6-0 after one quarter.

The Bold Gold would extend the lead to 14-0 after Gilbert ran it in from three yards out.  This was set up by receiver Jared Curtis' 25 yard catch on 3rd-and-15 keeping the drive alive.  The 2-point play was added by Reece who caught a pass from Curtis.  The Lopes had a 14-7 halftime lead.

The Antelopes would score once in the third quarter when Gilbert took the pitch around the right end made a cut, broke a tackle and was off the the endzone for a 70 yard touchdown run.

The Lopes went on score three touchdowns in the fourth.  Gilbert scored from 2 and 9 yards out, Reece added a 30 yard run and Rafael Gonzales booted two extra points.

The Lopes defense dominated most of the night.  Linebackers Reece and Saucedo and Gonzales kept the Eagles from running inside and outside linebackers Alex Ramirez, Blaine Osborn and Joel Lopez along with secondary players Wiley, Curtis, Ricky Fontenot, Ethan Self and Wyatt Gray controlled the outside and passing game.

Due to Tulia JV cancelling the game with Post, the Lopes will travel to Littlefield for a 5:00 p.m. contest on Thursday, October 18.