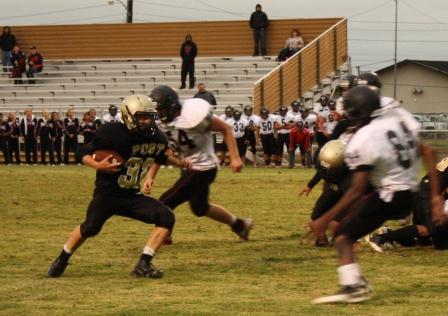 JV quarterback Blaine Reece led the Antelopes to their third win of their undefeated season against Slaton. The final score was 20-12. Reece contributed a running touchdown and team leadership.
(Click the above photo to see additional photos)

The Bold Gold football program filled the win column against arch rival Slaton Thursday as the junior varsity won 20-12, the 8th grade 32-0 and the 7th grade 28-6.  The first game of the day was the combined 7th & 8th grade B-team which played to a draw, 0-0.

The Antelope success on the gridiron continued on Friday as the varsity Lopes defeated Slaton in overtime, 22-15 completing the complete sweep of the Tiger program.

A special thanks to Coaches Jerry Pyles, Michael Pittman, Toby Allen and Jimmy Toney for the following contributions.

The Antelope JV (3-0) defeated Slaton 20-2 Thursday night at Jimmy Redman Stadium.  After a scoreless first quarter, the Lopes put 20 points on the board in the second.

The Lopes took possession on their own 35 and on runs by quarterback Blaine Reece and running back Cambry Gilbert crossed into Tiger territory.  On the final play of the drive, Gilbert took the pitch and out ran past the Tiger defense to give Post a 6-0 lead with 9:45 to play in the first half. The PAT failed.

Post would score two more times before half.  Gilbert once again got outside of the Tiger defense and scored from the 39.  Again, the PAT was unsuccessful.

The last score of the quarter was when Reece took a QB sneak in from 5 yards out behind the blocking of Raphael Gonzales, Blake Boren and Edel Sanchez.  Christian Saucedo's diving catch on the PAT gave Post a 20-6 lead at the half.

During the 2nd half Post moved the ball up and down the field but was unable to score any points.

The defense had several stops in the fourth quarter including a goal line stand denying the Tigers a chance to put points on the board.  Outside linebacker Blaine Osborn tackled the Tiger QB on fourth and goal.  Also in on the stand was Gonzales, Boren , Kaleb Crenshaw and David Hernandez.

The Post Antelope 8th grade team defeated Slaton 32-0.  Quarterback A.J. Escobedo led the way on offense with the first two touchdowns of the game on a 50 yard run and a 20 yard run to give Post a 12-0 lead at the end of the first quarter.

In the second quarter, running back A.J. Reed scored the first of his two touchdowns on the night with a 20 yard run.  After a two point conversion by T.J. Redman, the Antelopes went into halftime with a 20-0 lead.

After an interception by Bryce Phelps, Augie Menchaca had several good runs before scoring on a five yard run to put Post up 26-0.  A.J. Reed closed the scoring with a 15 yard touchdown run in the fourth quarter.

Defensively the Antelopes limited Slaton’s offense both on the ground and through the air.

Next week the Antelopes will host Tahoka.

This 7th grade crew looked great in their first game together defeating Slaton 28-6. Coach Toby Allen said he is "expecting some good things out of them" this season.